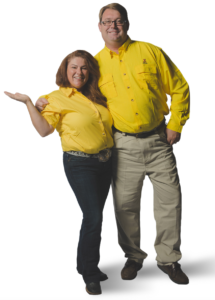 KOA NEWS SERVICE (May 17, 2017) – Chris and Pauline Wood, owners of the San Francisco North/Petaluma KOA Campground in California, have been identified by franchisee satisfaction research firm, Franchise Business Review, as being one of only 41 Rockstar Franchisees.

The Woods were selected from more than 30,000 franchisees, representing 340 brands that participated in Franchise Business Review’s research in the past 18 months. For detailed information about the firm’s selection methodology, click here.

“The Woods set an admirable example when it comes to leadership and business acumen,” said Eric Stites, CEO of Franchise Business Review. “They exemplify the far-reaching positive impact franchisees can have.”

The San Francisco North/Petaluma KOA is a former KOA Campground of the Year, and the Wood family has been an instrumental part of the Kampgrounds of America system since the park was constructed in 1973 by Chris Wood’s father. Chris and Pauline have each served on several of KOA’s key marketing and operational advisory groups, and their campground is always at the leading edge of KOA innovations and performance.

“The Wood family is the best of the best when it comes to KOA franchisees,” said KOA President and CEO Pat Hittmeier. “They are always part of the conversation when our top performing franchises are discussed. They run a wonderful facility, and are truly in tune with the wants and needs of their campers, are a wonderful resource for our other franchise partners.”

Visit FranchiseBusinessReview.com to see the full list of 2017 Rockstar Franchisees.

Kampgrounds of America is celebrating its 55th Anniversary in 2017. KOA, the world’s largest network of family-friendly campgrounds with more than 500 locations in North America, was born on the banks of the Yellowstone River in Billings, Montana in 1962. For more information, go to www.KOA.com or visit the KOA Pressroom at www.koapressroom.com.