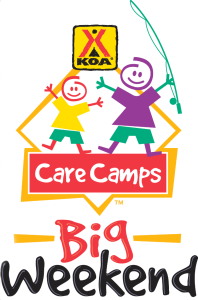 Campers who stay as paying guests at participating KOAs on Friday, May 8 will receive a night of camping on Saturday, May 9 for just a $10 fee. The 12th Annual KOA Care Camps Big Weekend event is the official start to the 2015 summer camping season.

The Care Camps Big Weekend event is also the major fundraiser for KOA Care Camps for children with cancer, the official charity of Kampgrounds of America and the KOA Owners Association.

All donations raised during the May 8-9 weekend, along with the $10 camping fee collected on Saturday, May 9, will go to benefit KOA Care Camps, a network of 95 specialized, medically equipped summer camps throughout North America that offer children batting cancer a true summer camp experience at no charge to their families.

In 2014, KOA Campgrounds raised more than $1 million from all sources during the year to benefit KOA Care Camps. A typical week at a medically supervised Care Camp can cost as much as $2,500 per child.

To reserve a site or Cabin today for this special weekend, go to www.KOA.com and click on the Big Weekend event box, or just go to www.koa.com/national-events/care-camps-big-weekend for a complete list of participating KOA campgrounds.

Kampgrounds of America is celebrating its 53rd Anniversary in 2015. KOA, the world’s largest network of family-friendly campgrounds with 485 locations in North America, was born on the banks of the Yellowstone River in Billings, Montana in 1962.