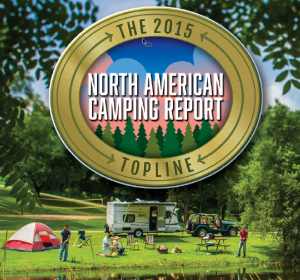 One in four campers is Hispanic, Asian-American or African-American, and free Wi-Fi ranks as one of the three most valued campground amenities according to KOA’s 2015 North American Camping Report

BILLINGS, Mont. (March 19, 2015) – The percentage of Hispanic, Asian-American and African-American campers across North America has doubled since 2012*, and more campers today prioritize access to free Wi-Fi over traditional camping amenities, such as access to cabins or recreational activities, according to the 2015 North American Camping Report, an independent study supported by Kampgrounds of America, Inc. (KOA).

The must-have camping gear, according to the results of the survey of nearly 3,000 people across the U.S. and Canada, is the cell phone, as 83 percent of all campers bring their mobile phone to the great outdoors.

What’s more, the heart wins out over the wallet, as more people today see camping as a way to escape the stress of everyday life than as an affordable vacation option.

“Camping today is more diverse than ever before, from who’s experiencing the great outdoors and how they’re planning travel to what amenities they prioritize and why they value camping,” said KOA CEO Jim Rogers. “Camping is not a one-size-fits-all travel experience. We’ve evolved our approach to outdoor hospitality by stressing what’s behind our yellow sign to ensure we’re matching camper expectations consistently, whether they’re enjoying the outdoors with a smartphone in hand or a good old-fashioned map.”

Highlights from the 2015 North American Camping Report include the following:

Nearly one in four campers in 2014 identified themselves as either African-American, Asian/Pacific Islander or Hispanic, a significant increase compared to past industry research efforts. Other key survey highlights include:

Today’s campers are more “plugged in” when preparing for camping trips and while at campsites. Of those surveyed, half of all campers (51 percent) claim that they go online at least once a day while camping, and four out of 10 (41 percent) say that having free Wi-Fi influences their decision to stay at a campground.

When selecting which campgrounds to visit and stay, free Wi-Fi ranks as the third most important amenity, behind only clean bathrooms and a kid-friendly environment, and outpaces access to recreational activities such as a campground store, cabins and even safety lighting.

The youngest campers (< 25) are more likely to bring a mobile phone (86 percent), compared to campers age 65+ (77 percent). Conversely, campers 25+ are somewhat more likely to bring along a laptop or notebook (29 percent) compared to the youngest campers (21 percent). Younger campers even say having a smartphone (28 percent) is almost as important as toilet paper (34 percent).

Camping as a Healthy Escape and Relationship Builder

Though the notion of camping as an inexpensive vacation option remains, survey results suggest that while the cash-saving aspect is still important, people are camping to build the emotional connection and relationships with family and friends in nature.

Looking ahead to the 2015 camping season, a majority of campers (53 percent) plan to spend more nights camping, and almost half (48 percent) plan to take more trips. Other key findings related to campers’ plans for the 2015 season include:

All surveys were completed online via an outbound solicitation sent by Survey Sampling International to a randomly selected cross-section of U.S. and Canadian households.

The sample of households was statistically balanced to ensure that the results are in line with overall population figures for age, gender and ethnicity.

For more than 50 years, Kampgrounds of America (KOA), the world’s largest system of open-to-the-public family campgrounds, has provided millions of campers with fun, memorable adventures. KOA was born in

Billings, Mont. Since then, KOA has grown to more than 480 locations in the U.S. and Canada. KOA’s family of properties offers diverse camping experiences, while maintaining the excellent standards and family-friendly atmosphere the company is known for.

Cairn Consulting Group is a market research firm with extensive experience in the hospitality and services industries. For the past several years, Cairn Consulting Group has worked with organizations in the gaming/casino areas, food services/restaurant space, accommodations, travel/tourism and outdoor hospitality, working with clients such as Caesars Entertainment, Pizza Hut, Hollywood Casinos, Chili’s, Route 66 RV and Rivers Casinos as well as ongoing collaboration with KOA.