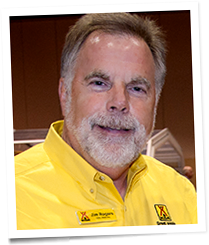 Rogers has been at the helm of KOA – the world’s largest system of family-friendly campgrounds – for the past 12 years. The company, born in Billings, Montana in 1962 and still headquartered near that first campground location, now has 489 locations in the U.S. and Canada.

“My front line assignments on ‘Undercover Boss’ affirmed the importance of creating KOA systems that maximize the time that campground staff members can spend with guests,” said Rogers. “I learned that the great people we have on the front lines can always use more time to better know and serve our campers. Genuine engagement, ultimately, is what it’s all about. KOA campground owners and their staffs are the real heroes of KOA.”

Rogers said he welcomed the chance to go undercover, taking on the persona of a “front line” KOA employee.

“‘Undercover Boss’ is great entertainment, but it also does a great service by taking the general public behind the scenes of popular companies,” Rogers said. “Every episode is a case study in business management.”

“My experience on ‘Undercover Boss’ once again confirmed to me the importance of ‘sweating the small things,'” Rogers said. “Being undercover gave me an unobstructed view of where our business gets done. Being there were no special advanced preparations for me, and that led to a lot of surprises – some good and some not so good.”

Rogers said he was heartened by KOA frontline staff’s understanding of the “Golden Rule” when serving campers, always doing their jobs in a manner that would exceed a guest’s expectations.

“It was also great to see our franchisees and our staff’s commitment to our charity effort for KOA Care Camps for children with cancer,” he said. “Their support for Care Camps really makes a difference.”

Each week, the Emmy Award-winning UNDERCOVER BOSS, which is in its fourth season, follows a different executive as they leave the comfort of their corner office for an undercover mission to examine the inner workings of their companies. While working alongside their employees, they see the effects their decisions have on others, where the problems lie within their organizations and get an up-close look at both the good and the bad while discovering and rewarding the unsung heroes who make their companies run.

For more information on the Kampgrounds of America/Jim Rogers episode of CBS “Undercover Boss” that airs Friday, January 11, go to KOA.com or cbs.com/shows/undercover_boss/